I'm not one to pour scorn on the achievements of the Labour Governments of 1997 - 2010, or indeed Blair's success as a leader.  I'm going to pointedly ignore the whole "possible illegal war" issue and remember what life was like as a parent of young children and the expansion of nursery provision, increases in Child Benefit, extension of maternity leave and positive acceptance of parental leave directives.  I applauded the reintroduction of Trade Union Rights at GCHQ and yes, I'd have liked the trade union reforms to have been much stronger but I'm glad that there was some progress.  I miss those times, before the Bedroom Tax, the NHS break up and the ongoing devastation of public services. I want a Labour Government back, of course I do, what kind of socialist wouldn't?
One thing I don't want, though, is for the former Leader of those years to write patronising, self-important, histrionic nonsense in whichever paper will have him about why voters like me are stupid and can't see what Uncle Tony sees - that we're all on the road to crazy left-wing Doomtown if we vote for Jeremy Corbyn.  You'd think they'd be happy wouldn't you?  Labour gains tens of thousands of new members and registered supporters.  Young people climb walls to peer through windows at a Labour Party meeting, rooms are so packed out, speakers have to climb on fire engines.  A politician seems to be genuinely liked and respected.  What's not to love?  It all looks great to me, but not a day goes by without some grizzled suit appearing in the media, waggling a finger and warning us we're all going to hell in a handcart, if we carry on with this nonsense.  And strangest of all, they think we'll all stop the silliness and go to our rooms to think about what we've done, shamefaced like teenagers caught smoking by the bike sheds.  As if we're not adults capable of rational decisions. Someone sneered on Twitter today "Is there anyone Corbyn supporters WILL listen to?"  Well, actually, love, yes. For me, there are over 600,000 people I'll listen to.  They're called the voters in this election and I'll listen to them and trust them to make the right call.  And whoever is elected, especially if it's a convincing first round win, will have my support.  Yep, whoever. Because that's how parties work, isn't it.
So, here's some free advice for Blair, Johnson, McTernan and all the others waggling the finger and offering me so-called advice.  Get. Over. Yourselves. Stop behaving like jilted boyfriends, whining about what we see in this bloke with a beard.  He hasn't even got a decent car, you snigger to each other over glasses of Sancerre.  Why can't we see how great things were with you, Tony?  Why can't we go back to those days, you wonder morosely.  Stop issuing warnings about how terrible our lives will be together, trying to claim he has a dark side and he'll hurt us.  We know you think we were NOTHING until you came along.  You cleaned us all up, put a shiny New sticker on us and it's as if we're not even grateful.  We're like Eliza Doolittle, thinking Oh, fuck it, I like talking Cockney.  Yep.  We are. And again, you need to Get. Over. It. Perhaps Alastair could take you all out, get you really drunk.  You could sing along to classic break up songs - Don't You Want Me by The Human League, Irreplaceable by Beyoncé - cry into your beer and pick a fight with some guy with a beard, who looks like HIM.  As the evening wears on you could tell each other you're the BEST and that we never really deserved you.  Late at night John Prescott will show up with the Jag, as you're all semi conscious and help you up.  "Come on, let's get you home," he'll say kindly and you'll ask him "Why, John, why don't they love me, I gave them everything". "It's over, mate" he whispers gently, "It's over and you need to move on". He's so right.
Posted by Outspoken Redhead at 06:28 No comments:

If Not Now, Then When? Why I'm voting for #Corbyn4Leader

Maybe it's the bite of winter.  Or the fact that I'm on a cold dark railway platform listening to melancholy music. The train is late and I'm encased in the sound of Kate Nash singing The Nicest Thing. Lots of us are waiting and we all find our own ways of passing the time, staying safe in our bubbles of solitude. Eye contact is avoided by tapping at phones, reading papers on benches at which we sit, careful to place bags between us and the next person to make absolutely sure we don't touch.
But perhaps my sadness is explained by living in a city in which a young woman has just taken her life and that of her newborn daughter.  A city through which she walked a considerable distance or perhaps took a cab or a bus.  I'll leave the speculation as to causes to others, as well as the handwringing and the downright triggering shock coverage to the gutter press.  What saddens me most of all is how alone many of us feel, despite living in densely populated places, with so many means of communication our heads spin with the constant connections. I wonder what I'd do, at the sight of a woman in slippers walking through the streets with a child in a blanket.  Unless she was in evident distress, I think I'd glance, worry and move on.  I'd be afraid of being seen as judgmental, or a middle class do-gooder.  How did our society get to a place where a term like do-gooder is used sneeringly and pejoratively. But imagine what might have happened if someone had reached out and asked if Charlotte Bevan was ok? Perhaps nothing.  Perhaps no one saw her.  But I find that hard to believe, in a city packed with CCTV cameras and busy with people socialising, leaving work, heading home or visiting friends.
There will be an inevitable inquiry and outrage that feckless NHS staff should have DONE SOMETHING.  We will read about it and roll our eyes, shaking our heads at the failure to protect this young woman and her child. But we're all to blame, you, me, and especially a society that is founded on keeping ourselves to ourselves, keeping the doors of family homes closed and keeping silent when we see bad things happening for fear it may be us next.  Self-reliance is fetishised whereas helping is at best undervalued and at worse, mocked. But needing help, of any kind places you at the bottom of the heap, an invisible person for others to step over.  It should make me angry. But tonight it just makes me sad.
Posted by Outspoken Redhead at 11:18 No comments:

I know Party Conferences belong to a complete Otherworld of Unreality, supposedly about policy, (speeches, full of sound and fury signifying nothing), networking (drinking, gossip and sycophancy) and energising party members (why does everyone come home exhausted?) but in reality, they are a hugely expensive way of getting on the TV and grabbing headlines.  Last year, I thought the key message of energy price freezes was, well, quite good.  Thousands of people die due to the cold every year, while energy companies make vast profits. Yes, of course I'd have preferred re-nationalisation, actually wouldn't everyone? We will have a single energy provider, with costs controlled by us and any surpluses going to schools and hospitals - can anyone tell me why that's a bad idea?
This year, an increase in the National Minimum Wage. To a level still below the Living Wage for London, but an increase - which is better than a freeze, right?  This morning - the headlines are: We will be tough on Child Benefit.  Right.  Tough, as in reversing the horrendous attack on families with children since 2010, as every fiscal study shows overwhelmingly that children in low income families suffered the most due to austerity?  Nope.  Tough as in freezing it or keeping the Tory set 1% cap.  That would be the cap Labour opposed? Yes.  And presumably by singling out Child Benefit, the message is what - we'll be tough on, erm, children?  Hey, what a shame there's not a Puppy benefit, you could be tough on that too.
Who thinks up these ideas? Clearly not Party Conference.  Almost certainly, some shiny haired bright young thing, destined for a safe seat somewhere.  Does anyone ever stop to wonder what real people think, or consider why the distrust and cynicism in the political class grows wider and deeper, while UKIP surge in places like Clapton and Rotherham.  And if so, do they do anything about it?  I think we know.
Here are my entirely random ideas for headline grabbing. Am not shiny faced, bright young thing, but me and my focus group of two cats think they're better than Tough on Child Benefit.
1. Give vote at 16, based on Scottish experience. I think it's already policy, but promise it from first day in office.
2. Force every MP to hold quarterly Question Time sessions in their constituency, at which a full list of expenses claimed and votes cast, along with a report of all work carried out on their behalf.
3. Hold a referendum on the re nationalisation of energy, rail and water.
4. Write off student debt of every graduate who works in NHS for five years following graduation.  Or any public service.  Insist employers with skills gaps pay back a proportion too.
5. Stop MPs taking on any outside work whilst in office.
There, five random ideas, none as radical as I'd personally like, but each headline grabbing in their own way and only likely to be controversial to those who probably are never going to vote Labour. Iwhy is it so hard?  Because, I believe, there's a consensus to keep the ship steady, forgetting that said ship is a centuries old vessel of privilege, inequality and oppression.  The sooner it hits the rocks the better.  What we want is an Opposition that does what it says on the tin, oppose the Government and not the working people of this country.
Posted by Outspoken Redhead at 02:25 2 comments:

The Great Big Patriarchal Shaped Elephant In The Room #RotherhamAbuse

Feminism in a Patriarchal World - Cats vs Dogs 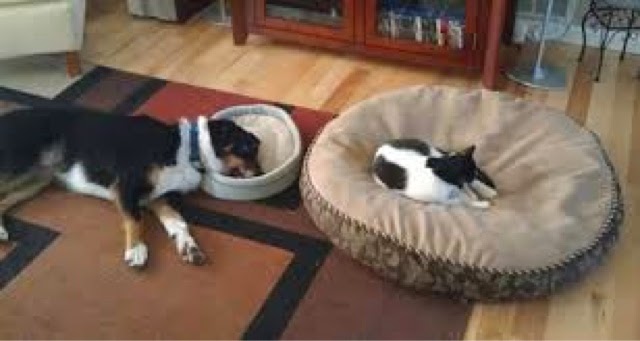 Posted by Outspoken Redhead at 11:39 No comments:

Being our own heroes

Outspoken Redhead
I have lots of opinions and like a good row, but try to stay polite. Unless you're a bigot and then you get what's coming.My life is mainly politics, trade union organising, feminism and trying to be a reasonable parent to my three children. I love to cook and eat, way too much and my best times are around the kitchen table with the people I love putting the world to rights. I also have cats. You were warned